Last summer my friend Chris was making these cute little boxes with her Big Shot and the pillow box die.  If you don't know what a Big Shot is it's a rolling mill type system that you can emboss and die cut paper..  They have been on the market in the scrapbook section for several years and are quite popular.  There is a whole lot more you can do with one of these but I'm not going to get into that today or ever for that matter since there is so much out there on them already.  The Big Shot itself isn't cheap they are running $60.00 but I got mine 2 years ago around Christmas time from JoAnn's and it was even cheaper so if you keep an eye out you can normally find a great deal.   The Pillow Box Dye is also available $15.00 but I got it for $10 since they often run these half off through JoAnn's online store. You can see that the set up for making these boxes isn't cheap but once you get that out of the way I made 100 boxes for $3.00 in materials since the brown craft paper was half off for 25 sheets and one sheets makes 4 boxes. 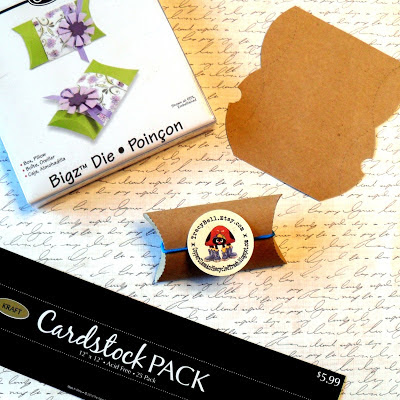 After I got the little boxes done, they measured about 2x3.5,  With a little tape on both ends they would have stayed closed well enough but I really hate tape and Chris had used some gold elastic to keep hers shut. I couldn't imagine tying that many bows again so I opted for bright colored dollar store hair ties, they come in a 100 pack and I don't think the price gets any better than that.   These looked nice enough on there own but I thought they would be even better with a bit of bling so I typed out my little logo with my etsy and blog address then cut them out with a fiskers 1.75 inch circle punch, taped them to the hair ties and there you have it cheap easy little boxes for the low price of, drum roll please......... $75.00 for the first 100 after that they would only cost around $6.00 per 100 if you get the paper on sale.  That's figuring in ink and extra paper for the little circles.  I also have one of those scotch tape rollers that I used to glue the little box flap with but you could use most anything there this is just what I had on hand. 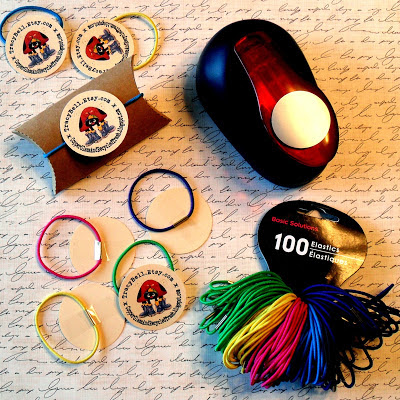 Once you are finished cutting out all those little boxes and they can be cut out of pretty paper,  I just like the basic kraft paper, you will have some leftovers that don't need to go to waste.  I got one of those little flower paper punches and used the leftovers to cut out price tags.  If you used pretty paper chances are the back side is plain so this would work with that left over paper.  Once I cut out the flowers I used a tiny round punch and popped a hole in them.  I love these on my jewelry because when it's hanging in my display they don't stand out like the little white ones I had before did.  These kinda blend with the jewelry, there there but not glaring at the customer. 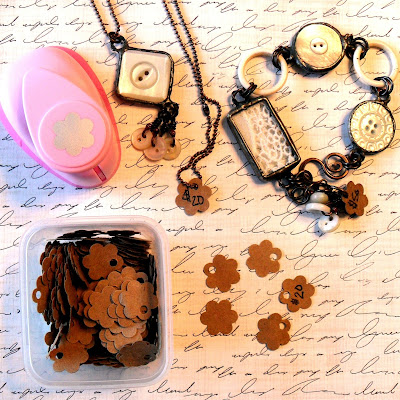 Is this a little time consuming, yes, was it worth it, yes :)
Posted by Beadbug at 5:47 PM